According to the lady, her family have betrayed her, adding that she has not known true happiness all her life.

A young Nigerian lady has left a suicide note on Facebook after taking her own life.

The lady has been identified as Adaeze Regina Okoh.

The young lady wrote a heart touching suicide note on Facebook, informing her family and friends that she was going to commit suicide, Salem Gist reported.

According to the lady, her family have betrayed her, adding that she has not known true happiness all her life.

Although the young lady did not mention the main problem that might have thrown her into depression in her suicide note.

However, 9 hours later, a cousin to the deceased posted on her timeline that she hurriedly rushed to her place when she saw the Facebook post but her door was locked.

According to her, she called some of the young men around to help her break the door, they broke the door and saw her lifeless on her bed. She said they rushed her to the hospital but she was confirmed dead on arrival.

Regina’s cousin isn’t buying the suicide story, she is however, alleging that someone might have killed her and makes it look like a suicide.

She said the incident have been reported to the police, she vowed that the family must “get to the root of the this” 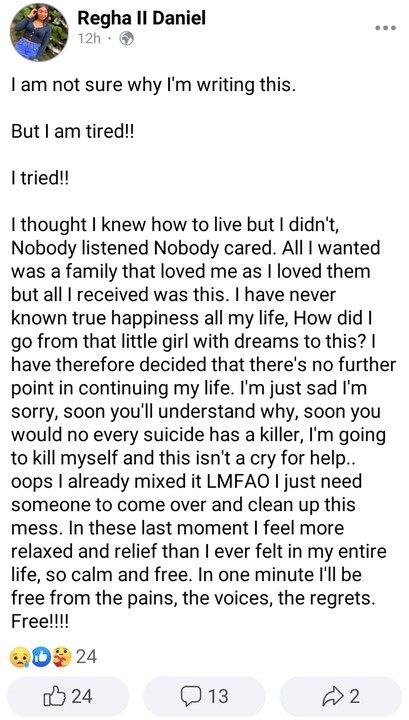 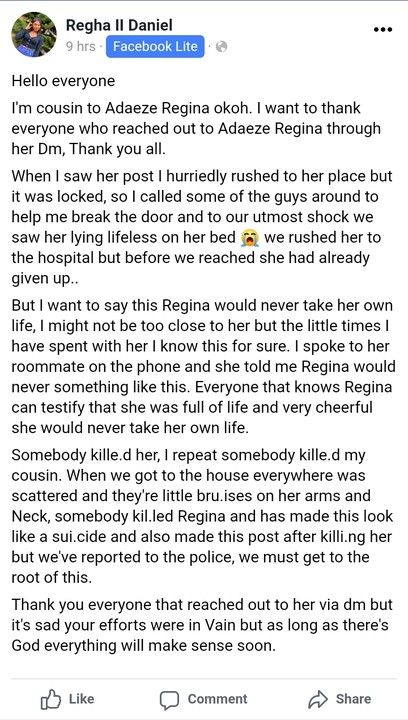