Kola Edokpayi, a popular human rights activist has lamented about the worsening insecurity ravaging the country.

According to him, during the era of Goodluck Ebele Jonathan, terrorism wasn’t as bad as it is today and despite that, many prominent pastors led a protest against insecurity and corruption but now, they are maintaining grave silence.

“Nigeria is presently the heartbeat of insecurity in the world. During the era of President Goodluck Jonathan, the rate of insecurity was not high as it is today, but some many prominent Pastors led protest against insecurity and corruption.”

“Today the Men of God who were constant in criticizing and protesting against GEJ are now maintaining grave silence in the midst of terrorism and kidnapping ravaging the entire country.

“Kudos to the Imam who used the Islamic pulpit to speak truth to power. All hands must be on deck to kill banditry and kidnapping before they finally killed and consigned the people to the dustbin of history.

“I want to use this medium to call on the Men of God to lead protest against insecurity in Nigeria. We are sick and tired of killings and kidnapping in Bongo” 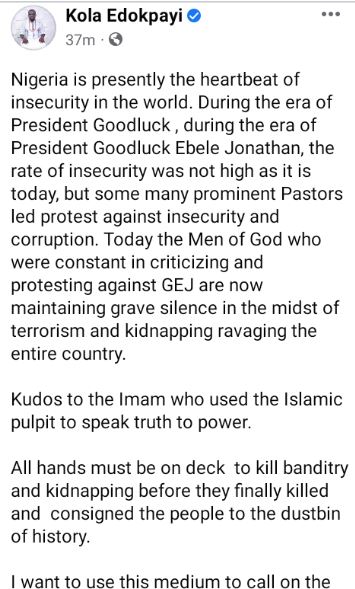 Who Is Simon Diffey? Bugatti Crash Victim Death As Family Is Mourning