BBNaija housemate, Ka3na Jones has replied her colleague, Tacha after she stated that ‘boss ladies’ do not need to be bankrolled by men.

Tacha made the statement on Twitter while addressing those who claimed her sugar daddy sponsored her Ghana trip.

Reacting to the tweet, Ka3na who often refers to herself and ‘The Boss Lady’ asked Tacha to calm down, saying that a girl can be a boss and still collect money from men.

According to the mother of one, “if a man is not spending on you, he’s busy spending on another woman”.

“@Symply_Tacha I don’t fk with you but gurl be calming down! A gurl can be a boss have her shit together and still collect from her man. If a man Is not spending on you he’s busy spending on another. As humans we put value where we put our money Periodtt,” she wrote. 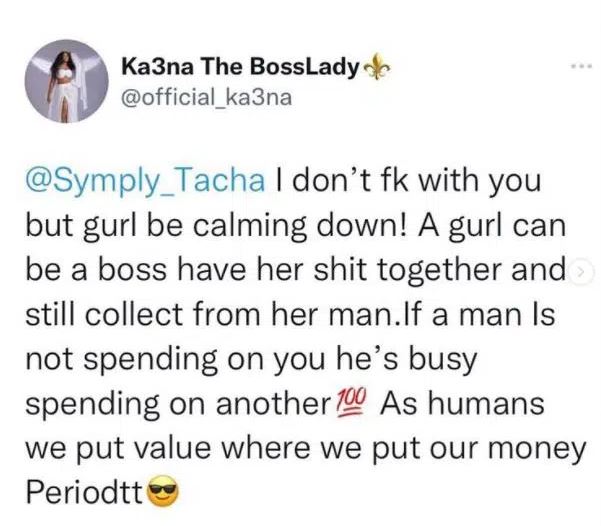 As Panthers Continue To Fight Through The Stanley Cup, Here Is What We Know About Sergei Bobrovsky’s Wife