A lady took to Twitter to disclose that she cannot be with a man whose mood changes whenever he does not have money.

In a post on her Twitter page, she asserted that a man who is only happy when he has money is a dangerous man. She added that whenever he goes broke his attitude to others change.

Ifeadu stressed that she also cannot be friends which any man who falls under the aforementioned category.

She wrote; ”I can’t be with a man who allows money to change his mood. A man who’s only happy when he has money is a dangerous man.

The second that man becomes broke. He starts to treat others like shit . I can’t be friends with such .. let alone be with someone like that.” 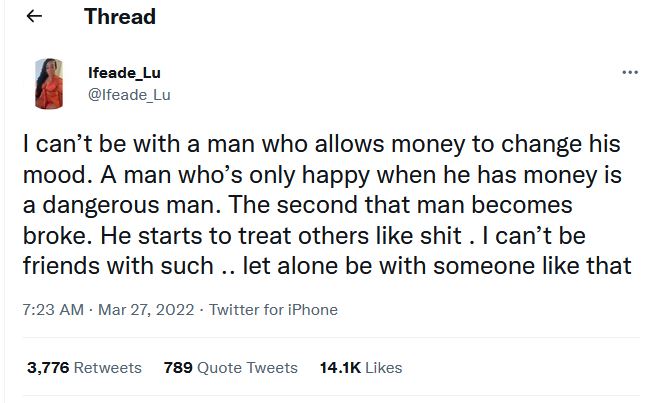 How Long Have Erana Tyler And James Tyler Been Together? Meet Love & Marriage: DC Couple

What Happened To Mason Dahlberg? Age Custody And Mother – Where Is Skydoesminecraft Now?