Photos Of Ebonyi PDP Publicity Secretary After He Collapsed In Court

Nwoba Chika Nwoba, the Publicity Secretary of the People’s Democratic Party (PDP) in Ebonyi State, collapsed at the Magistrate Court 3 inside the Ebonyi Judiciary Headquarters Abakaliki on Wednesday, January 12.

Nwoba was over the weekend arrested and handed over to the police by members of Ebubeagu Security over allegations of spreading fake news on social media, a crime punishable under the controversial cybercrimes law signed into law last year.

When he was brought to court on Wednesday, he slumped as he was about to enter the court. Efforts to resuscitate him failed, forcing the Police to rush him out of the court premises to a hospital. 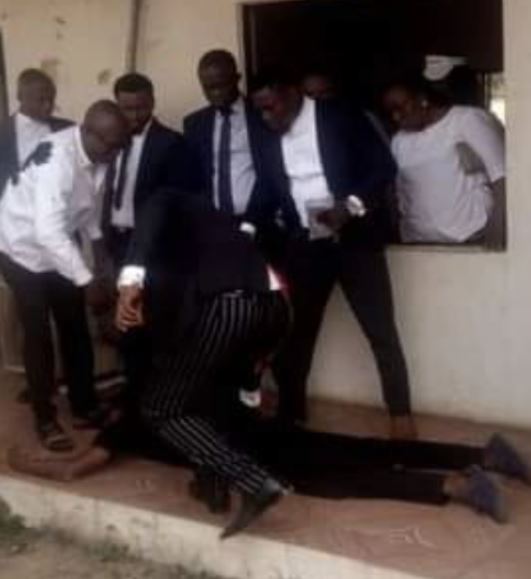 He was later carried into court by the police. His lawyer, Luke Nkwegu told newsmen that the Police said they were ordered to bring him back for arraignment dead or alive.

The Magistrate Court 2 sitting in Abakaliki presided by Blessing Chukwu adjoined the matter till 14th of January 2022. The court also ordered Nwoba be sent to the Police Clinic in Abakaliki for treatment.