Big Brother Naija shine ya eye ex-housemate, Liquorose, has addressed her fan-base after her fan dragged fellow supporters for not doing enough to support their favourite.

Reacting, Liquorose revealed that her fans have the right to support her in a any way they want to, and shouldn’t be compelled to make a specific post or use specific emojis on social media.

“Every supporter  of Liquorose has the liberty to express their love and support in any form and inscription with or without emoji . I love you all#EverythingLiquorose” 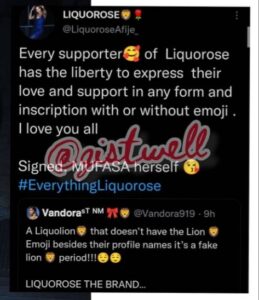 This is coming after her love interest and Reality Tv star, Emmanuel Umoh Jr simply known as Emmanuel fired back at a lady who called him fan of Liquorose.