A Nigerian soldier has shot dead a 28-year-old man identified as Chinonso Obasi in Ovim community, in the Isuikwuato Local Government Area of Abia State.

Punch reported that the incident happened at the popular Oriendo market in Ovim around 9:pm on Monday, January 3.

Residents told Punch that the soldier, who invaded the community in the company of his colleagues, had accused the deceased of blocking their way.

While the victim, said to be from Amune community, reportedly stood up to give way for them, one of the military officers allegedly shot him in the head, killing him on the spot.

A cousin of the deceased, Evangelist Ugochukwu Kingsley Bassey, who confirmed the incident, said that Chinonso was shot dead without any provocation.

In another version of the incident, a socio-political crusader, Eric Dwyse Ikwuagwu, said that Chinonso was killed because he refused to give up his seat for the soldier at a drinking bar.

“A soldier of the Nigerian Army attached to a very top former military brass killed Mr. Chinonso Obasi, a youth of Amune community, who was resident in umuahia until his senseless murder yesterday’s evening, the 3rd of January 2022,” he wrote.

“The ugly incident happened at the popular oriendo market in Ovim. Eye witness account has it that the deceased was ordered to vacant his seat at a drinking bar for the trigger happy Orderly. The deceased who refused to give up his seat and questioned the reason for such unnecessary high-handedness was shot immediately by this army personnel who was not even on uniform when the incident happened. This careless murder must not be swept under the carpet no matter who he is attached to as security Orderly. No life is more precious than another.”

The traditional ruler of Amune community and Okwu II, HRH Eze Chigbu Ikwulagu, said community leaders were in a meeting over the incident.

““There are different versions of what happened and we are still investigating. We will come out with a statement on the matter,” he added.

An official of the Nigerian Army, who confirmed the incident, said it had been reported to the Army headquarters and investigation was on. 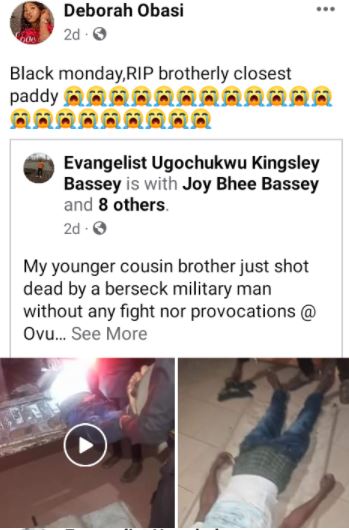