Singer Simisola Bolatito Kosoko, popularly known as Simi has taken to her Instagram page to dish out advise to up-and-coming artists on ways to succeed.

As a senior colleague, Simi took to her Instastories this morning to tell artists that use social media poorly to desist from it if they want to really succeed.

Simi said a visit to some of the social media handles of up-and-coming musicians shows that they share other things asides from their work as artistes and some want to remain mysterious instead of selling themselves at all times.

“You a “serious” growing artist and you have only 3 posts on your page. A picture of the sunset, one of aeroplane and one of your shoe.

Caption – Lost, but don’t find me. Nothing with your music in it. That’s not a great look.

If you want it bad bad always be selling yourself.

Leave the mysterious shit for when you’ve won! Even then, still leave it.”

It must be after her ‘tour’ to the artistes page she was directed to, that prompted her recent post. 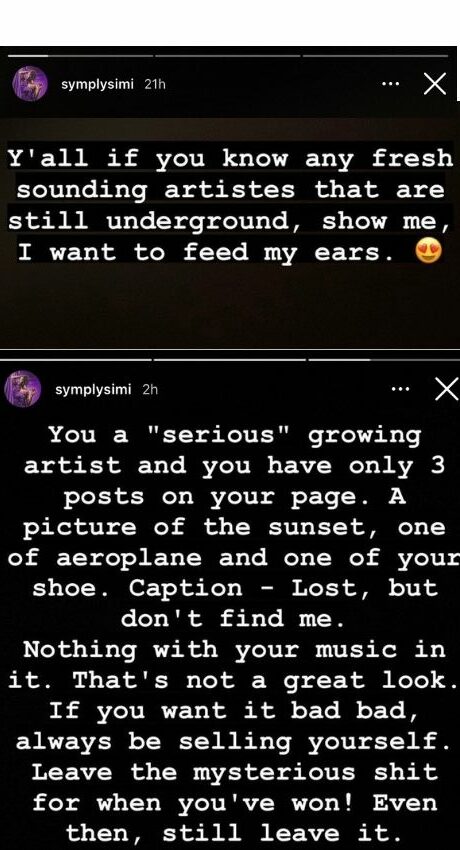 “Never seen a Greater miracle than myself”

Tonto Dikeh cries out over death of loved one

My connections are working, Jaruma brags after release on bail