Fifteen suspected cult members in Adamawa State University, Mubi have been apprehended during a cult initiation.

The cult group known as Neo Black Movement had been secretly recruiting members on campus until luck ran out on the group on Sunday when security operatives swooped on them and arrested 15 of them.

Operatives of the state police command arrested the 15 suspected cult members during their initiation on campus.

Weapons including axes were said to have been recovered from those arrested.

It was learnt that some charms were also recovered from the suspects. 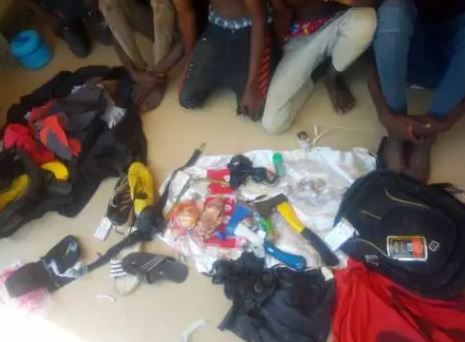 This comes as the university on Thursday announced the suspension of academic activities for two weeks following hostel allocation racketeering on the institution’s portal.

The spokesperson for the police command, DSP Suleiman Nguroje confirmed the arrest of the 15 suspected cult members to SaharaReporters on Sunday, saying, “The suspects were apprehended during cult initiation on Sunday.

“This is the first time the institution is experiencing this type of dangerous group trying to recruit members.

“The suspects belong to the most notorious cult group, Neo Black Movement who allegedly initiate other students as well as wreak havoc in the institution.”

“They would be paraded by the command during the week,” he added.

The university, in a circular released by its Information Officer, Belmond Benson, on Sunday, said, “The decision to suspend activities became necessary following the 8th extraordinary meeting by Senate of the institution where it directed for the suspension of the activities.

“The Senate during the meeting held on 18th November 2021, considered a report on hostel allocation racketeering on the portal and resolved that registration for the 2021/2022 Academic Session and other activities be suspended and advised all students to vacate the university premises,” he said.

UNIBEN called out for rewarding Best Graduating Student with 3,000 Naira

“It Has Been Paradise On Earth for Me” – Musician, KWAM1’s New Wife, Emmanuella Celebrates One Week Wedding Anniversary