The reality star made the call-out on Twitter on Friday.

“Na wa o Pepsi Naija what’s up with this Dubai matter na, it been over a year o,” he wrote. 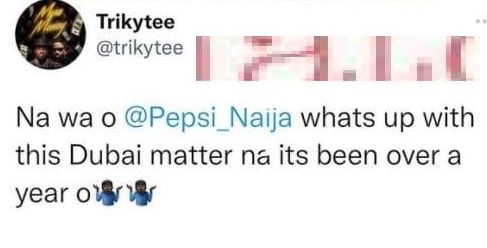 It will be recalled that the Trikytee and his fellow ex-housemate Ozo won one million naira cash prize, a one-year supply of Pepsi drink and an all-expense-paid trip to Dubai for a music festival after coming top in their Pepsi task during the Big Brother Naija Lockdown edition.

The reality star, however, claims that the promise of a trip to Dubai has not been fulfilled by the organisation.

Trikytee was evicted from the Lockdown season along with Ozo.

During his time in the house, Trikytee won the hearts of many with his personality which many described as easy-going, humble and sometimes comedic.