A veteran nurse lost her job in Australia after she gave three leftover doses of the Pfizer coronavirus vaccine to her daughter and nephews.

The Pfizer vaccine comes in a vial full of five shots which all have to be used within a matter of hours before expiring.

When Ms Peterson realised she would have to throw away three jabs, she called her daughter and two nephews to use them up.

All three were eligible for their shot but had not yet been able to get a booking.

The grandma, who has been a nurse for 43 years, said it had been ‘heartbreaking’ to throw away the three doses she had previously dumped in the bin.

She told A Current Affair: ‘You squirt [leftover vaccines] into the bin, it’s terrible, you feel terrible, all because you know [they] could be used for someone, but they go into the bin.

‘I’ve never opened a vaccine, and I never would, for those people in particular who are my family members. 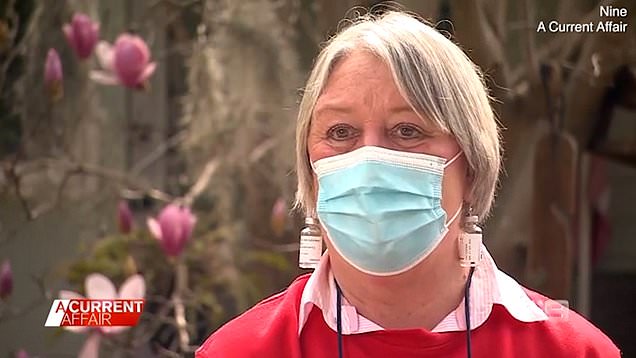 ‘These were spares that were going to be ditched.’

The not-for-profit argued its workers should be following procedure – which is to throw away excess doses if they cannot be redistributed to local hospitals and other Pfizer hubs.

Ms Peterson said she pleaded to keep her ‘only job’ during the pandemic but her employer refused and told her she had ‘squandered it’.

New South Wales chief health officer, Dr Kerry Chant, told reporters on Monday she ‘does not want to see one ounce or one dose of Pfizer going to waste at this current time’.

But she stopped short of commenting on Ms Peterson’s situation directly, saying she does not know the details.

Similarly, a doctor in the US was fired for giving 10 leftover jabs to some vulnerable people, which included his wife, in May.

In the UK, vaccination sites are required to always have a list of people who can be called at short notice to receive any unused jabs.