Massive queues piling up at Heathrow Airport have been blamed on an outbreak of Covid and a digital border system which is ‘crashing repeatedly’.

The Home Office’s £372 million security database – known as Border Crossing – reportedly broke down on Sunday, meaning passengers were rejected at the e-gates and had to be checked manually by immigration officers.

Tom Kibasi, deputy chairman of an NHS mental health trust, posted a photo on Twitter showing the queue ‘stretching the full length of Heathrow Terminal 5’— equivalent to about a quarter of a mile.

The problem has been exacerbated by the virus spreading among staff, with one in four understood to be self-isolating.

E-gates are also said to be rejecting more arrivals due to problems with scanning passenger locator forms.

Insiders have predicted ‘total chaos’ later this week, when the number of returning holidaymakers will reach levels unseen since the start of the pandemic. 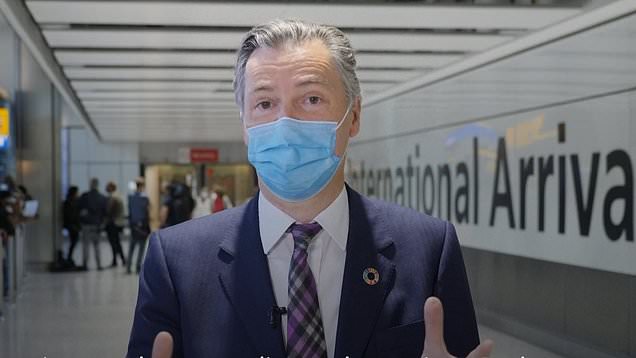 Friday marks two weeks since most schools broke up, meaning large numbers of families will be returning after a fortnight away.

One Border Force source told the Daily Mail: ’The peak hasn’t even started yet. It’s going to be total chaos by the end of the week.

‘Border Crossing is falling down all the time, and when it goes down, it stays broken for days. It’s particularly vulnerable when there are higher numbers of travel.

‘I can’t see any scenario where there isn’t going to be chaos when those larger numbers of passengers who went away as soon as schools broke up begin to return to the UK in the next few days.’

The problems come months after a scathing report criticised the way the Border Crossing project had been handled and warned that the Home Office had ‘no proof’ it could cope with higher numbers of passengers.

The Home Office said in 2014 that it would deliver a digitised border control system by 2019, with a budget of £199 million. But that year the project was ‘reset’ by the government, extending its delivery timescale by three years and adding £173m to the bill.

Members of the Commons public accounts committee, which published a report on the system in March, slammed the ‘staggering’ cost of government IT schemes and blamed a ‘lack of effective leadership, management and oversight’.

The Border Crossing system checks travellers’ names against terrorism records and had to be rushed in by the end of June because the database it replaced, known as the Warnings Index, can no longer handle EU travellers.

Heathrow admitted that queueing times at border control had ‘on occasion been unacceptable’ but attributed the delays to staff carrying out spot checks to ensure passengers were complying with latest government entry requirements.

However, one source said queues are also being caused by e-gates rejecting passenger locator forms used to help airlines contact people in the event of a coronavirus outbreak.

They told The Times: ‘If you put a space or dot where there shouldn’t be one, [the gate] just rejects it.’

The problems come as more passengers are set to arrive in the UK following the loosening of travel restrictions.

Double-vaccinated passengers from the EU and America no longer face quarantine, meaning more traffic is expected through airports.

While passenger numbers are rising, more staff are currently away from work due to testing positive for Covid.

Of 300 Border Force staff at Heathrow, 80 were absent with the virus at the weekend, and dozens more were forced to isolate because they had been a close contact of one or more of them, The Times reports.

A Heathrow spokesman said: ‘Waiting times at the border have on occasion been unacceptable and we have called on the UK Government to address the problem as a matter of urgency.’

A Home Office spokesperson said: ‘Border Force works hard to ensure it has the right level of resources to check that passengers are compliant with our border health measures and to maintain border security as travel continues to open.

‘We know the valuable role eGates play in speeding up passenger journeys while maintaining security. We are in the process of upgrading our eGates so that they can also check passengers’ health requirements and that work will continue throughout the summer.’