A three-year-old boy was left heartbroken after he released the butterfly he had watched grow for several weeks with disastrous consequences.

Ronnie Seddon, from Rotherham in South Yorkshire, had kept the caterpillar in a plastic box while watching it turn into a chrysalis then emerge as a white butterfly.

In the video Ronnie is seen turning the plastic box upside down and shaking it to let the butterfly, which he has called Ralph, out into the family’s garden.

It lands on the ground and soon flies off, but catastrophe soon occurred.

The family dog, Marvel, runs after the butterfly to try and catch it – then swallowed it whole.

Danny is heard saying from behind the camera: ‘It’s free… Marvel. Marvel, you idiot! Marvel’s eaten him.’

Ronnie is instantly seen looking upset once he realises what has happened. 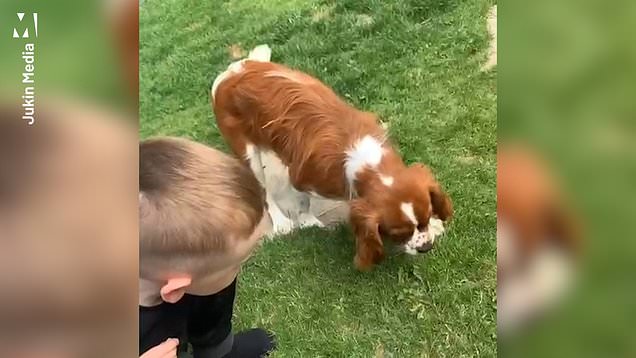 ‘I stopped recording as Ronnie got upset,’ Danny said.

‘He’s three years old and for a full day now has not stopped talking about his butterfly Ralph.

‘We grew him from a caterpillar and decided it was time to set him free when our dog decided differently.

‘I shared the video on my Facebook and people can’t stop laughing at it.

‘Ronnie has been very angry at our dog Marvel and refuses to talk to him.’

Danny added their Cavalier King Charles is ‘very cheeky’ and often causes trouble around the house.