Three-year-old greyhound, Ross, has never had a loving family – but hopes his quirky appearance will work in his favour.

The pooch recently retired from the track and is now looking for a new home.

Ross’ goofy grin has already won over the team at Cheshire Dogs Home (CDH) in Warrington, and they think his unique smile will help him attract an owner.

The team said: ‘Ross is an excitable boy who has recently retired from racing, he can’t wait to see what the big wide world has in store for him.

‘As you can see his most distinguishing feature are his amazing “teefs”, we have no doubt that he will turn heads as you walk down the street.’ 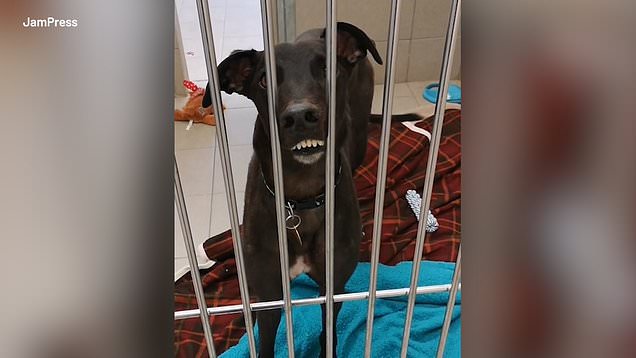 Due to his high prey drive, Ross needs a home without any cats or small animals, as well as a fair amount of outdoor space.

A spokesperson for the charity said: ‘He is sociable with larger dogs, however dogs with high prey drive can sometimes mistake a small running dog in the park for the lure they have been trained to chase. He is trained to wear a muzzle on walks and we strongly advise that this is continued in his new home.

‘He would love a secure garden where he can run about and play safely.’

Despite his high speeds on the race track, Ross is a bit of a couch potato and loves plenty of sleep.

Much like other greyhounds, he enjoys two or three shorter walks a day – to use up his energy in short bursts – which leaves plenty of time for napping, playing and cuddling.

However, anyone thinking of adopting Ross must be willing to put up with a few of his quirks.

The spokesperson added: ‘Ross may need to act out some puppy behaviour, like chewing, which ex-racers typically quickly outgrow.

‘Greyhounds are eager to please and can be trained with patience, consistency and positive reinforcement.

‘Most greyhounds do not know how to sit, climb stairs, or play games only because they have not yet learned. With time they can learn all of these things.’

Ross also won’t be familiar with general household items, such as hoovers and TVs, so will need a patient owner while he adjusts to these new experiences.

Get in touch by emailing MetroLifestyleTeam@Metro.co.uk.


MORE : I thought my dog was annoying – but he was trying to save my life


MORE : The best dog-friendly staycation for you based on your pup’s breed


MORE : The fruits you shouldn’t feed to your dog

The lifestyle email from Metro.co.uk

Get your need-to-know lifestyle news and features straight to your inbox.

Not convinced? Find out more