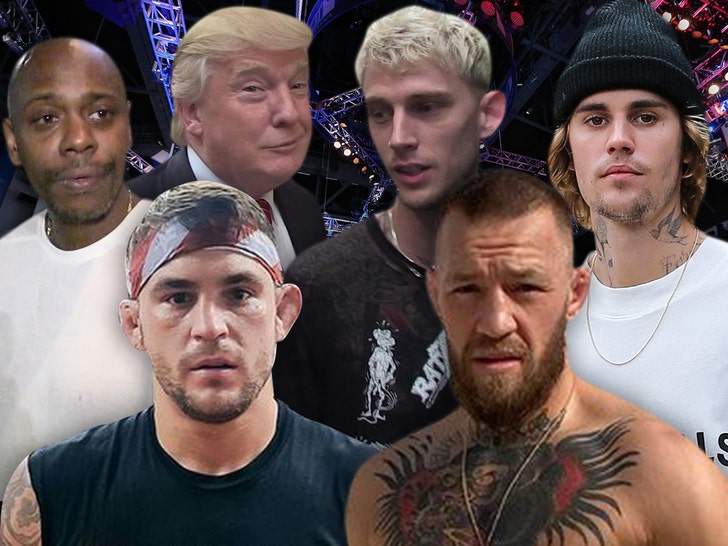 A POTUS, a Biebs and a Kardashian walk into a fight — that’s what’s going down at UFC 264 in Vegas this weekend … with a massive list of celebs set to watch Conor McGregor face-off against Dustin Poirier!!!

Our UFC sources confirm … former President Donald Trump is among huge names slated to hit up T-Mobile Arena on Saturday for the fight … including Justin Bieber, Megan Fox, and Machine Gun Kelly.

“I’m not a businessman. I’m a business, MAN” –@TheNotoriousMMA

Of course, Dana and Trump go way back — in UFC’s early days, Trump offered White his casinos to host fights … and the UFC honcho went on to throw his support behind #45 during his 2016 presidential campaign.

On top of that, Trump and Conor have had nothing but positive words for each other in the past … with McGregor calling him a “phenomenal president.”

Phenomenal President. Quite possibly the USA 🐐. Most certainly one of them anyway, as he sits atop the shoulders of many amazing giants that came before him. No easy feet.
Early stages of term also.
Incredible.
Congrats and Happy Martin Luther King Jr. day America 🇺🇸❤️🇮🇪

The celebs in attendance are in for a highly anticipated treat — remember, Conor handled Dustin back in 2014 … but Poirier got his revenge earlier this year.

Now, the question is — does Trump fanboy and hang out with McGregor after the fight?!?

I Didn’t Know I Will Be Alive To Celebrate My 50th – LAGOS Celebrity Woman, Olori SANDRA THOMAS Reveals

•Excerpts From Her Brochure, OST Glows @ 50 Olori Sandra Thomas is a popular Skincare specialist. She loves to make other women look good....