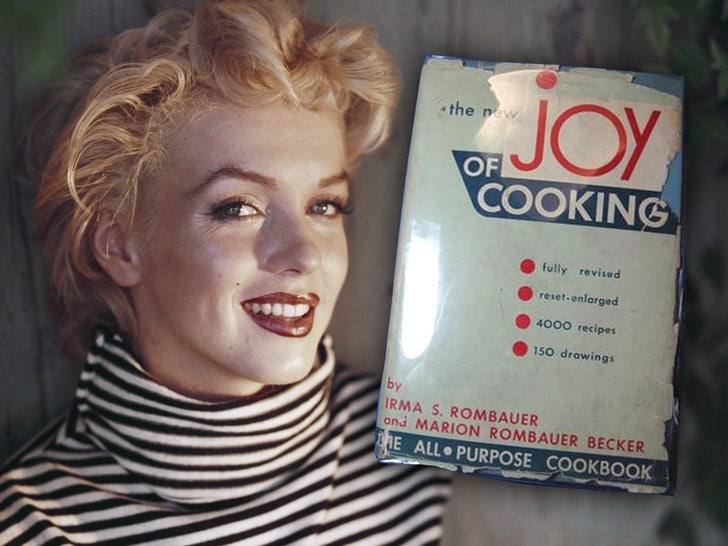 Marilyn Monroe‘s cookbooks — the only 2 confirmed to have been owned by the icon — offer a glimpse into her personal life along with her diet … and they’re expected to fetch up to $75,000.

The books — “The New Fanny Farmer Boston Cooking-School Cook Book” and “The New Joy of Cooking” — were both published in the early 1950s and are in decent shape for being 7 decades old … but of course, the content of the hardbacks are hardly the attraction.

Instead, it’s the fact that several handwritten notes are included in the cookbooks … including a listing menu for Beef Bourguignon and marrow bone soup, a grocery shopping list, and a deli business card on which she wrote a Doheny Drive address on the back.

There’s also a newspaper clipping of a recipe for cheese lasagna that she doodled on, and perhaps most interestingly … a typed diet with options for all 3 meals.

According to the diet … Marilyn had either orange juice or stewed prunes to drink daily for her 8 AM breakfast along with toast and cereal. She went pretty carb-heavy for lunch, and had the choice of beef, chicken, lamb, sweetbread, fish or chicken liver for dinner.

She also had 2 scheduled milk and cracker snacks, and capped everything off at the end of the night … with eggnog at 11 PM!!! It’s unclear if the nog was spiked.

MM’s cookbooks go up for auction June 22 at Siegel Auction Galleries and are estimated to sell for somewhere between $50-75k.